skip to main | skip to sidebar

NO to Quebec Provincial Bill 94!

Will you allow your government to deny essential services to women based on what they wear?

Take Action on December 3rd! Say NO to Bill 94! Participate in the action wherever you are.

Bill 94 is proposed legislation in Quebec, which if approved, would deny essential government services, public employment, educational opportunities, and health care to Muslim women who wear the niqab (face veil).

Find out how to get involved at:

The eighth annual Ottawa Trans Day of Remembrance will be observed on Saturday, November 20th, 2010 starting with a rally at Minto Park on Elgin Street between Lewis and Gilmour at 1: 30 p.m. The rally will be followed by a march to Parliament Hill in recognition and support of Bill C-389 that will add gender identity and gender expression to the list of prohibited grounds of discrimination in the Canadian Human Rights Act and to the hate crimes and sentencing provisions of the Criminal Code of Canada. Later in the evening, there will be a Candlelight Vigil at the Human Rights Monument on Elgin and Lisgar at 7pm.

We are offering the rally at Minto Park an alternate meeting point for all those who are not comfortable attending a flag-raising rally at the police station organized by members of Gender Mosaic at 1pm, out of respect for trans sex workers, street-involved trans people, trans people of colour (who make up a significant portion of people honored through the “Remembering Our Dead Project”) and other people who have been the target of police brutality and oppression. It also failed to acknowledge the current political climate between the Ottawa police and the queer community due to the police boards’ position on HIV non-disclosure and resistance to constructive dialogue.

The rally is also to recognize and in solidarity with all diverse voices, identities, and experiences of our community, as we cannot sit idly by while many people in trans communities are being excluded and neglected for the sake of media publicity and political convenience. It is the right of every trans person to be included and empowered by an event established to memorialize loved and lost ones and recognize the challenges faced through transphobia, discrimination, intolerance, hate and potential death because of our gender identity, gender expression or transition experience/status.

On this day we have the opportunity to help trans people of all backgrounds to raise awareness, to encourage dialogue, to celebrate the lives of trans people and to mourn for our loved and lost ones. We encourage everyone interested in supporting the lives of ALL trans people to join us in a rally, a march and a vigil. In the meantime, please spread the word and let everyone you know! Write to your MPs to support Bill C-389! Bring your friends and family!

For updated information about the rally and march as we near November 20th, please visit http://www.facebook.com/event.php?eid=160851957278283. We can also be reached at ottawatransdayofremembrance@gmail.com

Organizing Committee for the Ottawa Trans Day of Remembrance 2010

Posted by vfbenjamin at 10:46 AM No comments:

Everyone is invited to attend the Ottawa Vigil to End Homophobic Violence this Thursday, October 21st.

As with other heavily attended vigils in Canadian cities, this event is being held to remember the lives lost due to homophobic bullying and hate and to remember and recognize all experiences of gender and sexuality based violence.

This vigil is being held for remembrance but also to acknowledge that homophobia is not only toler...ated, but rampant and even encouraged in our society. The recent suicides reported in the media are not isolated, nor are they the only queer suicides that are happening in our communities - queer people are overrepresented when it comes to suicide and homelessness, as a result of homophobia. Queer suicide is a hate crime by society.

If we are going to stand up with queer youth, we need to challenge homophobia transphobia, and heteronormativity in all aspects of our communities; in health services, in the legal system, in schools, in the police and military, in popular media and amongst each other.

This means reinstating the new Ontario sex ed program, this means an end to the criminalization of HIV-AIDS, this means support and dignity for youth who find themselves living on the streets due to homophobia, this means queer content in school curriculums, this means access without fear to health and social services regardless of immigration status and most importantly it means listening to those queer voices on the frontlines of this important battle.

The vigil will begin with speakers at 8pm at the Human Rights Memorial on Elgin @ Lisgar and will march to Parliament hill for closing speeches and a moment of silence.

To get involved, for more information, or if you wish to speak, please contact Nicole or Georgeanne at 613-562-5755, or queer.faction@gmail.com.


*Need support? Trained anti-oppressive support workers from the Carleton Coalition for a Sexual Assault Support Centre will be wearing arm bands and will be present to offer 1 on 1 support listening at any time before, after or during the vigil. 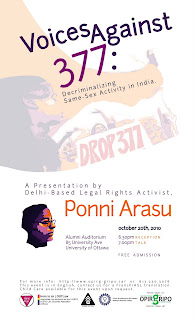 Wednesday October 20th, 2010
Alumni Auditorium, 85 University, University of Ottawa
Reception at 6:30pm, Talk starts at 7pm
Free
For more info: http://www.opirg-gripo.ca/ or 613 230 3076
Event is in English. Contact us for French / ASL translation
Notify us 48 hours in advance for child care.

Ponni will speak to her experiences as one of the core activists who worked on having gay sex decriminalized in India. Ponni will focus her
talk on the legal aspects of queer rights struggles in India, and will
reflect on how effective this approach is, both in India and
internationally.

Bio: Ponni Arasu is a queer feminist activist from New Delhi, India. She has
worked with the Alternative Law Forum in Bangalore, India, as well as with
the Law and Society Trust in Colombo, Sri Lanka. Her work involves a range
of human rights issues including gender, sexuality, labour and conflict.
Since 2003, Ponni has worked with Voices Against 377, a coalition of
women’s groups, child rights groups, human rights groups and sexuality
groups formed to initiate discussions on sexuality and the law. Voices Against 377
filed an affidavit to strike down Section 377 of the Indian Penal Code, the section that
criminalizes gay sex.

A totally cute alternative to the gaystream!

On this 25th Anniversary of Capital(ist) Pride it is time we act out against the assimilationist agenda of "Ottawa's most colourful festival"! Cumpletely Queer aims to create an accessible alternative to Ottawa's Pride Week, while building coalitions amongst queers, radicals, and radical queers. In so doing, Cumpletely Queer hopes to revive the radical roots of Pride.

Join us as we re...ject gentrification, corporate sponsors, apartheid, assimilation and celebrate gender-bendin, sex positivity, queer histories, and much more!

Note to Allies: Straight-identified allies are welcome to join us, but please recognize that "Pride" is a queer space. Furthermore you should expect to be perceived as queer at these events.

TELL ME HOW YOU WANT TO FUCK: Learn how to ask for what you want in a fun and safe environment
@ 3PM

**If you would like to help organize, have other ideas to bring to the table, or have an event organized anytime from August 20-29th that you wanna incorporate, give us a shout at queer.faction@gmail.com or just write on the wall**
Posted by vfbenjamin at 1:30 PM No comments:

CBC News - Ottawa - Ottawa barbershop to serve all after complaint

CBC News - Ottawa - Ottawa barbershop to serve all after complaint

Imperial Barber Shop announced Friday evening that it will offer its services to everyone at its Glebe location after an Ottawa woman complained she was refused a haircut there.

Co-owner Nancee Hunter said in a release that the barbershop on Bank Street has received an amendment to its lease that her business partner said forbid the shop from cutting women's hair. It will now offer services to all customers at the location as it has been doing at all its other Ottawa locations.

Last month, Jayda Kelsall said she was riding her bike along Bank Street when a sign promising a cheap haircut caught her eye.

She said she went inside the Imperial Barber Shop and was told to go somewhere else.

"I was pretty shocked," she told CBC News. "I have really short hair. I have a mohawk. I was just looking for the sides to be shaved a little bit and trimmed up, and they flat out said no."

Imperial co-owner Gilles Lemenoise said his staff turned women away all the time.

Pointing to the hair salon above his barbershop, he said Thursday that to avoid competition his landlord bans him from cutting women's hair.

But the landlord, Minto Group, said Imperial misinterpreted the agreement.

"However, exactly it's written in the lease I don't know," said Greg Rogers, executive vice-president. "But the spirit of the agreement is that he deliver men's-style haircuts."

It doesn't matter whether a man or woman gets the cut, but it has to be a men's style, Rogers said.

Ottawa human rights lawyer Nigel McCready said it is a violation of the Ontario Human Rights Code to deny someone service based on gender, whether or not the landlord has a contract with a business owner.

"The rights that are enshrined there are important enough that you shouldn't be able to make a private agreement that you're going to disregard someone's human rights," said McCready. 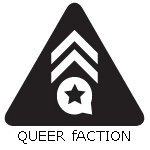 à propos de nous / about us


Queer fAction is a radical queer group, based in Ottawa, challenging gender oppression, patriarchy, heterosexism and all other oppression within the queer community and society at large. We believe in the complete freedom of sexual and gender expressions, harnessing the power of grassroots to express solidarity and confront oppression.

Visibility:
-Essential to our struggle, we must be visible as queer people in our communities.
-Smashing closets, repression, and self-hate.
-We are open to being perceived as queer during our meetings and actions.
-Marginal voices cannot possibly be articulated by one monolithic queer group on campus or within our communities.
-We oppose all forms of assimilation as death through erasure.
-We will create a radical presence at queer events and a queer presence at radical events.

Grassroots:
-Operating our group at the community level, independent from any state or government.

Non-violent Direct Action:
-Actions that are ends in themselves, or lead to concrete ends.

Accessibility:
-Events and meetings should be wheelchair accessible.
-Published items ought to be (at least) French-English bilingual.
-Language should be accessible; specialized or academic vocabulary and concepts should be defined or explained.

Sex-positivity and Sexual Health:
-Acknowledging the ultimate right of individuals to engage in consensual sex acts and relationships, with anybody, with any motivation, paid or unpaid.
-We support the use of harm reduction methods (including but not limited to the use of barriers, education, and testing), as we recognize the effects of HIV-AIDS and other STIs on queer communities as well as other communities


Anti-capitalism:
-We reject the comodification, exploitation, and corporate appropriation of our queer identities
-We reject pink capitalism and gay dollars as tools for liberation

Voluntary Association:
-Recognizing individuals' rights to act independently or with the group.

-This is a living document and is subject to annual review each spring, by consensus, while maintaining the integrity and spirit of the original document.

-Translation of the document can be agreed upon at regular Queer fAction meetings, outside of the annual review

Promote Your Page Too

Queer fAction Blogspot by Queer fAction is licensed under a Creative Commons Attribution-Noncommercial 2.5 Canada License.
Based on a work at queerfaction.blogspot.com.